Antigua sailing between Steel Band and Spirit of Tradition 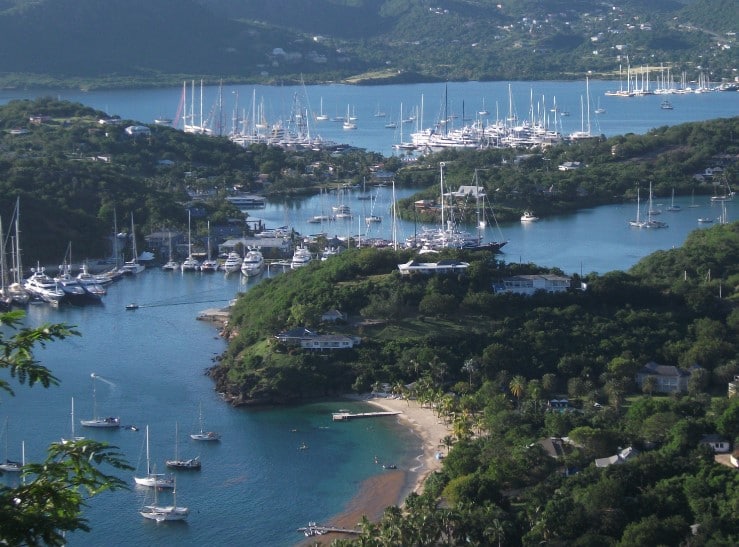 Life is Sailing & Party: noblest sailing yachts at the Antigua Classic Yacht Regatta, high tech racing boats at the Sailing Week, beach parties around the clock: each year in April, yachtsmen and women and enthusiastic fans meet for the Caribbean highlight of the season on the island under the wind. Charter guests are always welcome – and can, in addition, discover an Antigua, which has more to offer than numerous dream beaches. 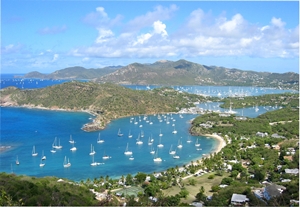 The “Spirit of tradition” is the most important aspect at the Classic race, bewaring the traditions, good seamanship and lot’s of fun.Windlasses of bronze glitter in the sun, busy crews polish her ships for the “Concours of Elegance”, because beside the competitive races,old beauty counts for this contest. Old work boats, modified fisherman or pilot boats, lie next to yachts which had been designed for gentleman sailors in pre-war periods. The famous America Cuppers of the thirties which meet here again – like the J-Class yachts “Velsheda” and the “Ranger” – are the most famous, reborn or built after old rips with modern technology.

In April of this year, 60 boats took part in the Classic Yacht Regatta. A week later, over 1,000 yachtsmen and women on 140 yachts – among them numerous charter yachts – battled to victory at the Sailing Week and at the same time completed genuine survival training in form of a weeklong continuous party.

365 dream beaches – one for each day of the year

Apart from its sailing highlights, Antigua distinguishes itself in particular by four characteristics: beach, friendly people, good infrastructure (without touristic sins, but with noble hotels and villas) and the spirit of tradition of British history – mixed with exclusivity. The driest island of the Caribbean has an extremely large amount of dream beaches. Canny advertising strategists count 365 – one for each day of the year. The British, however, are not only coming to Antigua because of the beaches. They stationed their War fleet at English Harbour, because the natural harbour is famous for its “hurricane hole”. Later, they cleared the largest part of the Rain Forest, to cultivate tobacco for Europe, which had become addicted to nicotine, before they switched over to sugar cane and rum. 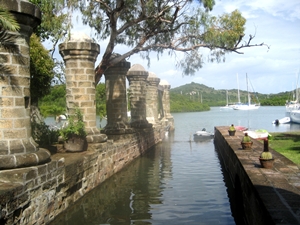 History in short: the first Europeans arrived in Antigua, which was formerly known as Waladli in 1630. The local beer Wadadli still reminds of this time. The first warship landed about 40 years later. The first harbour buildings at English Harbour were erected in 1725. Nelsons Dockyard, named after Lord Horatio Nelson, is now a National Park and with its Dockyard Museum definitely the most interesting tourist attraction. And in spite of all tradition this place is inhabited and very much lively: the awe-inspiring Admiral’s Inn with its range of excellent Caribbean drinks is “very British”. Giant stone bollards remind of the large warships – and a palm tree, which has grown as straight as a pole, of a visit by Queen Elizabeth in the sixties.

The former British Crown Colony gained its independence in 1981. Only a few people live on its associated Island Barbuda, which is well known as a nature and bird paradise; the third larger Island Redonda is uninhabited. Antigua itself, stretching over 280 square kilometres, has a population of about 80,000.

It pays, to hire a car to discover the Island and the best place to start is its capital St. John’s. The historical buildings of the Cathedral of St. John’s Devine and the Courthouse lend their colonial charm to the capital. The drive across the island shows much of the typical Caribbean architecture with brightly painted little wooden houses and more elegant villas in the hills near All Saints.

More than 100 churches with live music 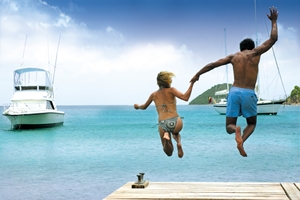 Wherever you look you see churches – belonging to over 100 different Christian beliefs. The church services swing with music; the locals turn their church attendance into a Caribbean party with live music. The path through the Fig Tree Valley between Jolly Harbour and English Harbour shows the last remaining Rain Forest.

The Sunday trip leads almost inevitably to Shirley Heights: the most beautiful viewpoint of the island gives magnificent views to English and Falmouth Harbour – the Islands of Montserrat and if the view is clear, Guadeloupe, can be seen on the horizon. Apart from that, it is a place where half of Antigua, tourists and locals meet: Steel Band live is performing, for hours and without a break, followed by Reggae, which also shows no sign of slowing down and accompanied by a barbecue and Wadadli! 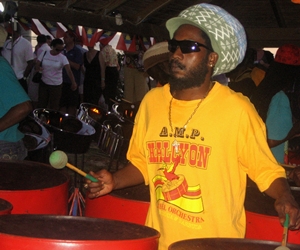 Caribbean high season is during the European winter whilst during our summer, Antigua is a great alternative destination to avoid the overcrowded Mediterranean beaches. A special highlight is taking place at the end of July /beginning of August: carnival on Antigua is celebrated for the 52nd time, for eleven days, from 23rd July to 4th August 2009, with nonstop parties, Calypso competitions and the big carnival parade. Every year, this colourful highlight reminds of the abolition of slavery on 1st August 1834. Another parade, which takes place on the 1st November of each year commemorates the independence of the country gained in 1981. November is musically devoted to steel pan. The best steel bands of the entire region perform at the “Moods of Pan Festival” and enchant their audiences with the sound of this unique music instrument.

The best time for sailing is between November and Mai; the summer too, thanks to a permanent breeze is not too hot, however, the hurricane season can dampen the sailing spirit a bit. Charter yachts are available in Antigua itself – or one explores the terrain with a trip starting from the large charter bases in St. Martin or Guadeloupe. Here you find more information about sailing in Antigua and the Caribbean! For details about yacht charter on Antigua or the participation in the Sailing Week please do not hesitate to ask!