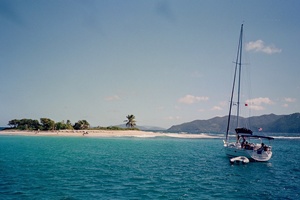 During the BVI Spring Race the Caribbean sailing elite has its get together on the British Virgin Islands, however, during races of the Bitter Yacht Club the luminaries of the America’s Cup occasionally take part as well. The sailing waters of the British Virgin Islands are in a class of its own – idyllic, enchanting, Caribbean and very, very safe. The manageable size of the area makes these sailing waters very suitable for Yacht Charter beginners and families. The B.V.I. tourist board advertises the archipelago, which provides yachtsmen with plenty of variety in a territory of about 32 by 15 miles, with the slogan “Nature’s little secrets”. The altogether 60 islands are mountainous and tropically green – a part from the flat coral island Anegada at the North of the archipelago. Lots of beautiful anchor bays are protected by offshore reefs, which guarantee blissful snorkeling. The trade wind is constant in the Sir Francis Drake Channel, which extends as sheltered sailing waters with little swell between the islands from Southwest to Northeast. With the distances being so short, land is always in sight.

The nautical infrastructure for Yacht Charter of the British Virgin Islands is excellent, admittedly the prices are steep. The overnight stay is considerably cheaper at anchor or harboured at a mooring buoy. On the island of Tortola alone, there are 17 marinas, 5 on the 2nd largest island of Virgin Gorda, one each on Peter Island, Saba Rock and Marina Cay. Many marinas provide their own mooring buoys as well. More buoy fields with moderate mooring fees can be found on the island of Tortola, in Cane Garden Bay to the West of the island, in Trellis Bay to the East, at Beef Island and in the Paraquita Bay – there you are safe from hurricanes as well. You can moore at buoys off the picturesque rocks of The Baths on the island of Virgin Gorda, as well as in Little Harbour on the island of Jost Van Dyke, in the Bay of Manchioneel on Cooper Island, at the island of Anegada, and at Salt Island near the wreck of the Rhone, which is a veritable sight for those, diving and snorkeling. There are 20 additional bays, one more beautiful than the next, which have been marked out as official anchor sites – which doesn’t mean that there aren’t already plenty of other idyllic spots…

Jost Van Dyke to the West of Tortola has been named after a buccaneer and still boasts pirate allure. The beach at White Bay is one of the most beautiful in the whole of the Caribbean. Great Harbour with its little frame houses is the picture perfect quaint Caribbean village. Foxy’s Bar, whose owner entertains his guests with live music, is a legendary meet for sailors. Its decoration mainly consists of yacht club – flags from all over the world. The island of Sandy Spit off Jost Van Dyke “only” has sand and a few palm trees to offer. It is one of the most popular photo scenes in the whole of the B.V.I. and a sought after anchorage ground. An alternate mooring place, in case it gets crowded, is Sandy Cay, which is owned by the Rockefellers. 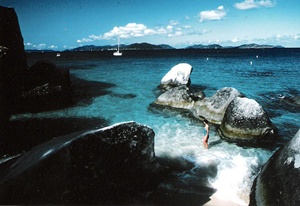 The visual highlight on the island of Virgin Gorda to the East of the archipelago are The Baths, huge rock formations, protruding from water, with grottos and natural little pools. Pay attention when climbing: the seawater has washed the rocks round and smooth. Above the rocks, the restaurant “Top of the Bath”, boasts a magnificent view and scrumptious cocktails. Biggest village of the “Fat Virgin” is Spanish Town, with a marina, good opportunities for shopping and fantastic restaurants. Situated in the North Sound, just 12 miles off Tortola, the Bitter End Yacht Club with marina, water sports services, hotel, pools, beach, boutiques, bars and restaurants is a veritable meet for sailors. In November, the Pro-Am Race attracts sailing luminaries to the club. There are two national parks on Virgin Gorda: the Little Fort National Park, which is also an animal preserve and houses the remnants of an old Spanish fort, and Gorda Peak National Park with its colourful exotic plant life, situated on the highest peak of the island. In the South of the island remains of an old copper mine can be visited.

Every little island of the British Virgin Islands has its own charm, be it Guana Island, Great Camanoe or the little Archipelago of The Dogs to the North of Sir Francis Drake Channel; Saba Rock in the North Sound, Norman, Peter, Salt, Cooper or Ginger Island, which confine the channel to the Southeast like pearls on a string, with lots of little pearls in between. One of the most popular hotel resorts in the Caribbean is situated on Peter Island. Close by is Dead Chest Island, which reputedly got its name when the notorious pirate Blackbeard, put 15 men ashore on this island with only a bottle of rum. Snorkellers enjoy the caves of Norman Island, which was the setting of Stevenson’s “Treasure Island”. You’ll still find commercially used salt lakes on Salt Island. In 1867 the postal ship “Rhone” has sunk off Salt Island in a hurricane. Today the wreck is a national park and divers can explore a breathtaking colorful underwater world. Saba Rock used to have pirate flair with only one little bar and a dinghy dock but now houses a hotel resort as well. Necker Island to the North of Virgin Gorda is owned by Richard Branson but is also rented to well off guests for their Caribbean dream holiday – chef, gardener and yacht included of course.

The entirely flat island of Anegada – make sure to follow the instructions in the handbooks when you lay the land – boats marvellous long sandy beaches, two ponds with flamingos and other birds, a little settlement and reportedly the tastiest lobsters in the Caribbean.

How to get here: The international airport with the airport code EIS is located on Beef Island and accessible via bridge from Tortola. Tourists from Europe usually arrive to the British Virgin Islands via Miami, Puerto Rico or Antigua.

There are important yacht charter fleets with sailboats and catamarans for bareboat charters in the BVI that are not listed in our Yachtfinder – please ask for offers. And of course we will be glad to send you offers for the most beautiful luxury charter yachts with crew in this area as well.