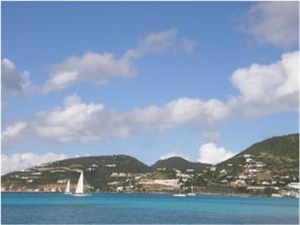 French in the North and Dutch in the South: Sint Maarten or Saint Martin is the starting point for many Caribbean sailing trips. Together with Saba and St. Eustatius (as well as the ABC-Islands located further south) Sint Maarten forms the Dutch Antilles. St. Martin belongs to the French overseas department of Guadeloupe. Also from a landscape point of view, the island is divided into two parts: The French Grande Terre is more mountainous; energetic centre is the village of Marigot, situated on the Baie Marigot. The Dutch South is more flat, changing into a plain with salt-water lakes towards the coast. Between the large salt-water lake Great Salt Pond and Groot Baai lies Philipsburg, Dutch centre and a tax-free shopping paradise. The airport, located on the scenic Simsonbaai, which is where the Sailors arrive, is utilized equally by both nations and it goes to show that the divide into two parts doesn’t have an impact. The islands tourist infrastructure is fantastic; the hotel complexes are well maintained and mostly built in such a way as not to impair the scenery of the dreamlike bays.

Yacht Charter fleets are based in the West, in Marigot, in the Anse Marcel and in Oyster Pond on the east coast. The Baie Grande Case, northeast of Marigot lends itself as an anchorage for day trips: with a long sandy beach, good anchoring ground, many colourful houses ashore and lots of little restaurants with good West-Indian cuisine and bars. Right next to it you can spend the night proctectedly at anchor in the Anse Marcel or moor in the Marina Port Lonivilliers.

After the circumnavigation of the northern cape of St. Martin – beware of reefs and rocks – you can anchor off the flat little island of Tintamarre and enjoy the beach life. The Orient Bay on the east coast offers the only nudism beaches of the island – in the appendant restaurant, clothes, even during the meal are unwelcome. The beach on Orient Bay is a perfect dream: Every part of it – Bikini Beach, Waikiki Beach, Coco, Kakao and Kontiki Beach has shacks, in front of which anchoring is possible. At night you can haul away to Oyster Pond.

The south coast of St. Martin boasts several beautiful coves for bathing and the ideal shopping-stop in Groot Baai. It’s best to lie in Bobby’s Marina or in Great Bay Marina in the northeast of the bay and walk from there into the centre of Philipsburg. Surrounding the marinas, plenty of small shops and service companies have located themselves. The large Simson Baai (Simpson Bay) lies a few miles further west – the access to Grand Etang, the Great Salt Pond, which is also accessible for yachts, is located below a drawbridge. The pond is one of the safest hurricane holes of the Caribbean and also the location of several marinas, including Island Water Marina and also Simpson Bay Yacht Club. There is an exit of the Etang on the French side as well – directly to the Baie de Marigot.

There are plenty of exciting trip destinations for Yacht Charter crews surrounding St. Martin. Anguilla is strung-out, 14 miles long and only 3 miles wide max. The island with the main town “The Valley” is allied with Great Britain, driving is on the left hand side and it is considered to be extremely safe. Turquoise waters and dream like beaches lure but this small paradise hasn’t been overrun by the tourism. One of the most beautiful bays in the South is Rendezvous Bay, next to it you can clear inward in Blowing Point Harbour. On the north-west coast, located on Mead’s Bay, there is another dream like beach, the coral reef Dowling Shoal with the little island called Sandy Island looks just like the tropical picture perfect island. Road Bay is well protected, haunt to many yachts and most important port of entry; you’ll meet other crews in one of the restaurants on the waterfront in Sandy Ground Village. Crocus Bay, adjoining Road Bay was once the main harbour of the island and makes for a good bathing stop. The snorkelling beat near Seal Island Reef with the Prickley Pear Cays is a dream come true for explorers of the underwater world.

St. Barths is considered the Caribbean St. Tropez: French (even if the architecture of Gustavia, the main town, undeniably shows Dutch influences), chic, elegant – here the fantasy about a luxury sun bed underneath palm trees, a pool on the beach and cocktail service is reality. There is a range of very exclusive hotels and resorts. Boutiques sell clothes and art – as long as it’s precious. St. Barthélemy is mountainous, boasts great bays and a see worthy airport: the small twin-engined island-hoppers hurtle down the mountain, the pilots slam on the brakes, the runway ends just before the sea… there are warning signs on the road to Gustavia: Attention! Planes are crossing. A visit to Gustavia is a must, not only for clearing in but also for a stroll around, some shopping and dining. It’s possible for Yacht Charter crews to moor for a limited amount of time on the pier just off the port authorities, or else it is advisable to anchor in the outer harbour off Fort Oscar in the Anse Public or even better in the Anse de Corosson off the same-named little fishing village. Coming from St. Martin or on the return journey there, people often head into Baie Columbier in the Northwest, a beautiful anchor bay with crystal clear water. The most beautiful bay on the northern coast is the Baie de St. Jean with an offshore reef, due to the reef the entry into the Anse de Marigot, located further east is only doable during good visibility. In the south of the island the Anse de Saline makes for a good anchorage.

Saba is a small, dandified and very rocky island – very safe; the little houses are reminiscent of the Dutch ancestors. It’s possible to tie up on the pier on Fort Baai, situated on the southern coast; from there a walk takes you into the main village, “The Bottom” and into a green valley with well-tended gardens. The only bays suitable as anchorages are Ladder Baai and Well’s Baai on the West coast; Saba Marina Park – a true snorkel paradise with mooring buoys in the most beautiful spots lies between Fort Baai and Ladder Baai. Statia, once known for the cultivation of tobacco and later for cotton, coffee and as a trade ground for slaves and goods, has extended its tourist infrastructure in recent years. Mount Quill, an extinct volcano, inviting the visitor for a hike through the crater with its Tropical rainforest, is the highest elevation with about 6.400 feet. Oranje Baai off the main town of Oranjestad is the only anchor bay worth mentioning; it is possible to tie the dinghy on the pier. See worthy: the Old Gin House, Fort Oranje, the Historical Foundation Museum and Upper Town with a mix of West Indian and New-England architecture.

St. Kitts, christened by Christopher Columbus after his first name, and once the first British settlement in the Caribbean, is an independent state in the British Commonwealth. People arriving from St. Martin can make a stopover off the scenic Sandy Point Village: there are good anchorages, colourful houses, a yellow church spire and a little pier. The prettiest anchor bay is Basseterre Bay with a seemingly endless beach. It is possible to clear in and out in Basseterre, which is the administrative site of St. Kitts & Nevis but the same goes for Charlestown, located on the neighbouring island of Nevis. Basseterre, stretching along the bay, is colourful and characterised by old Colonial buildings and offers provision means and plenty of restaurants with Creole cuisine. It’s possible to tie up the dinghy on dock in Fisherman’s Warf in the western part of the bay; sailors can bunker water in the eastern part in St. Kitts Port. The round-island-trips from Basseterre with a visit of the old plantations are worthwhile. Only two miles southeast the next dream like beach awaits the visitor on Frigate Bay, which is an open anchor, bay with beach bars and the amenities of a luxury hotel. In Whitehouse Bay, the next bay, you’ll find a beautiful snorkelling beat surrounding a trawler, which has sunk on a coral reef.

The small sister island Nevis, only two miles off – Columbus named it Nuestra Senora de las Nieves, possibly because the Nevis Peak with its 3.200 feet reminded him of high mountains in his European homeland, is much more mountainous than St. Kitts with lots of crevices. The beaches are deemed to be some of the most beautiful of the Caribbean, especially the one on Cades Bay. Pinney’s Beach in the North of Charlestown, is almost cheesily beautiful in a Caribbean sort of way with palm trees, fringing the white beach and turquoise coloured water. Charlestown itself is equally picturesque – an extended walk through the village and a visit of the market close to the pier, which offers mooring for dinghies, is worthwhile.

The volcano of Soufrière on the island of Montserrat is still active. After the last eruption in the late 90ies, the population had to abandon the South with its main town Plymouth since it has become uninhabitable and barren. Until today it is a no-go area for the most part. Lots of residents left the island, many resettled in the safe northern part of the island. For a long time, the island disappeared from trip itineraries, but by now is selected more and more often. Yachts anchor off the harbour in Little Bay all the way up in the North of the island; there are plans for the construction of a yacht harbour and additional buildings surrounding the harbour. By now there are trips to watch the active volcano from a safe distance and the diving tourism too is being pushed. Montserrat is a British crown colony, in former times catholic Irishmen, dedicating themselves to distillery and ship building, used to settle here. The present inhabitants, delighting in visitors and guests, testify to the Afro-Irish mix that has evolved through generations. Non-whites with red hair and sometimes freckles are no rarity. And St. Patrick’s Day is still celebrated extensively.