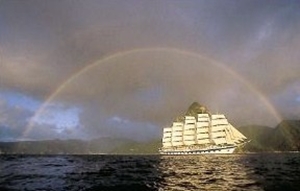 Once a year, the Yacht Charter destination St. Lucia is the gathering place of the sailing and Yacht Charter scene: The Caribbean island is the target of the yearly happening Atlantic Rally for Cruisers and thus the gateway to the Caribbean island world for many yachts, spending the winter Yacht Charter season in the Leeward Islands. Tropical rainforest, sulphur springs, lush vegetation and large plantations characterise the island which is a favourite place for many Yacht Charter crews – the island state reminiscent of Great Britain is wonderfully green. Saint Lucia is of volcanic origin, one of the most well known sights are the Pitons, two mountains of about 2.400 feet, visually dominating the Southwest and well to be seen during most parts of your Yacht Charter cruise in St. Lucia. The iinhabitants of the relatively populous island focus on quality tourism both in the hotel business and the Yacht Charter domain.

Yacht Charter crews often pay a visit here on their way from Martinique to the Grenadines, but also on St. Lucia itself Yacht Charter bases are already deployed. There are three marinas on the island which are fantastically equipped for Yacht Charter tourism: The Rodney Bay Marina lies to the north of the trade port of the main town of Castries, the marina of Marigot Bay on the west coast and Soufrière below the Pitons in the southwest, between Marigot and Vieux Fort. All three marinas are also Port of Entry; here Yacht Charter crews can clear inward or outward comfortably. 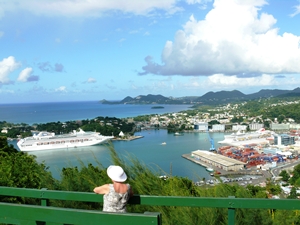 The main town of Castries offers only a few mooring spaces for yachts. Anchoring is possible in Vigie cove, where sailors meet in the restaurants. The shore leave shows a town with only a few traces of the Colonial style left , for example the Government House. The markets and market halls are quaint, there’s a lot of hustle and bustle in the harbour: By now plenty of cruise liners moor in Port Castries and there is a vast duty free shopping mall in the Spanish style too. If you take some time for a shore leave you can visit old grand estates, sugar mills and more Colonial sites.

Marigot Bay is so extremely picturesque that it has served as a backdrop for many films. Fringed by Tropical greenery and mangroves you can anchor here or moor directly in the marina. It goes without saying that restaurants, bars and facilities for provisioning are in place here but also a tourist infrastructure with rental cars and jeep tours. A day anchorage, two and a half miles further south in the Anse Cochon, lends itself for swimming with clear waters and a multi-coloured under water world for snorkelling near the shore. 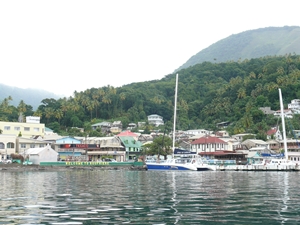 Beautiful diving beats can be found further south, plus picturesque traditional fishing villages such as in the Anse la Raye or in Canaries. The large bay of Soufriere, stretching from the Anse Chastanet in the North to Beaumont Point in the South, is a marine preservation area. The yachts are tied up on mooring buoys, belonging to the marine preservation organisation; the official water taxi service provides services during tie up, tips for snorkelling and trips. Especially the coral reef off Anse Chastenet is worth seeing for people interested in snorkelling. It is particularly beautiful to lie at anchor off Hummingbird in the North of the bay, overlooking the Pitons. It is possible to moor on a buoy directly at the foot of the mountain in the Anse des Pitons. The marina in Soufriere is relatively new and well equipped. Soufriere itself, with scenic markets and still some buildings dating back to the colonial era, is starting point for trips to the “Drive-In” volcano, the diamond waterfalls, the botanical garden and the sulphur springs.

There are hardly any good anchorages between Beaumont Point (Gros Piton Point) and Vieux Fort on the southwest coast of St. Lucia. Only in Vieux Fort Bay or Point Sable Bay, off the eastern tip, located on Maria Island and housing a nature preserve with rare animals, a stop is worthwhile. For shopping or a good meal you can berth the dinghy on the pier in the harbour of Vieux Fort or directly in town.