Exploring the island world of Dalmatia by crewed charter

The charm of the Middle Ages in Trogir, vineyards and lively ports on the island of Vis, the great Mediterranean piazza in Hvar, turquoise-coloured waters in wonderful bays, the exquisite fish-cuisine of Croatia, warm winds and lots of sun…

There are still a lots of other reasons why more and more yachtsmen explore Dalmatia – following Illyrians, Greeks, Romans, Byzantines, Austrians and other peoples arriving there hundreds or thousands of years ago. And beginners, who never sailed before, can easily enjoy a cruise with a professional skipper. e picturesque old town spreads below the fortress of Trogir, the captains of the excursion boats await the tourists directly at the old port. The modern marina, situated on the peninsula of Ciovo to the other side of the port, tempts with elegant charter yachts. The boats are an attraction, not only for experienced yachtsmen – there are three crews eagerly waiting to get on board. Some of the guests from Germany have never been aboard a sailing yacht.

Two hours later a woman, who never sailed before, is acting as “helmsman”, amazed at how easily the 15 metre yacht “Jolly” can be directed through the gentle waves. Something smells deliciously from the galley: The skipper is cooking lunch. Three sun worshippers are lying relaxed on the foredeck. The cruise, they used to dream of, has started. Shortly after, they try their first anchoring manoeuvre – and their first jump into the warm, crystal-clear water of the Adriatic Sea. 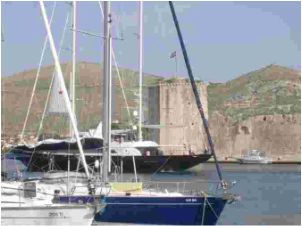 Next destination is Vis, an island located half way between the Croatian and Italian coast. The crew is greeted by the early evening hurly-burly at the quay of the old port. A short walk through narrow streets lined by little houses with neat gardens directly by the sea, ends straight on the terrace of the excellent restaurant Polodja, which has received a number of famous rewards. After more or less nine different exquisite courses, most of them with delicious fish and seafood, they seek refuge in the arms of some local booze with a very complicated name. The next morning the crew is faced with a choice: Some of them go for a ride on rental bikes to explore the island and visit the vineyards and ports on Vis, the others sail to a small island nearby and take the dinghy to row into an enormous blue grotto. There aren’t any other boats waiting to go in, unlike at the famous grotto on Capri. The fisherman who was supposed to take the admission fee has gone for lunch.

In the evening all ships meet again in a small bay near Hvar: Cooking in both pantries, eating on one yacht – story telling and laughing late into the night. After shopping for more supplies, they set sails again at noon the following day – a strong wind takes them to Hvar, the beautiful capital of the island of Hvar. Time to take some pictures – the view from the old fortress down to the main plaza with its famous theatre could not be more splendid.

Sailing and relaxing, enjoying picturesque bays at anchor, strolling through quaint old towns – much too soon the cruise is over, even if the week on board seems to be much longer due to the intense experience. During their farewell dinner in Trogir they all agree to come back to Dalmatia.

The female guest, who learned to steer now knows about wind directions, the most important knots and has no problems at all to tack or to jibe. None of them had to learn to sail but the above mentioned guest, who is passionate about golfing, grew very fond of sailing – and for her and the remaining crew this will not have been the last cruise.

If you would like to share the experience of a fascinating cruise too, you can easily book a charter yacht with skipper and explore the islands of Dalmatia. The yachts offer a lot of comfort. Meeting place under deck is the cosy salon with the pantry. Each yacht has several showers as well as a fresh water shower on deck. Sailing experience is not required.