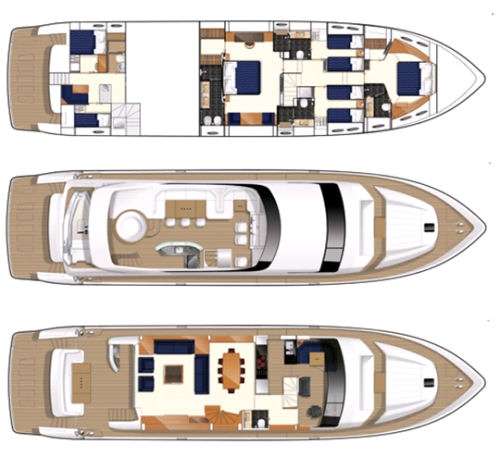 Captain : Antonis Antoniou
Captain Antonis, is definitely the heart and soul of 4LIFE, being her Captain since her delivery to Greece in 2013 and working for her owner for the last 13 years, since 2006, when he delivered his previous Princess Motor Yacht from France to Greece. He is a very capable and experienced Captain, having worked on luxury motor yachts during the last 18 years. He is a Merchant Marine Academy graduate with a Class A’ Captain’s license for unlimited size of vessels. From 1999 until 2006, when he started working for the owner of 4LIFE, he was as a Captain of luxury Motor Yachts of up to 36 meters, having cruised all over Greece, Turkey and the Mediterranean
Before joining the yachting sector, he worked for 15 years as Captain and 2nd Officer on various ships.
Captain Antonis manages everything on board perfectly and at the same time puts all his efforts to please every guest need, aiming to provide the most enjoyable time on board.
With his “can do” attitude and his pleasant, calm and exceptionally positive personality Captain Antonis gets always excellent evaluations by all clients.
And with his extensive knowledge of the Greek and other Mediterranean coastlines, ensure the most unforgettable holidays on board.
Languages: English & Greek

Chef : Stathis Georgatzas
Stathis is a talented Chef pleasing all clients with his mouthwatering creations.
He has worked as a Chef in Nikki beach 5* hotel (Porto Heli, Greece) and in various Hotels and restaurants in Mykonos, Santorini, and Skiathos. From 1982 to 1995 he owned a restaurant in Volos, Greece and from 1995 to 2012 he owned two pastry shops in Volos, Greece. He has a studied as a Chef in a private Chef school.
Languages: English, Greek

Engineer /Deckhand / Water Sports Master : Dimitris Lymperopoulos
Dimitris is an exceptionally qualified multi-talented Engineer, Water Sports Master and Deckhand.
He has worked as Engineer and Deckhand on various charter and private Motor Yachts of up to 55 meters.
Besides his duties as Engineer and Deckhand, he is also the Water Sports Master of 4LIFE.
From 2011 to 2013 he was water-sports and speedboat operator in Ios Paradise club, during the summers.
From 1993 until recently he worked as an Engineer in Yamaha and Tohatsu marine engines in Lamda Marine.
From 1989 to 1993 he worked as an Engineer in Yamaha Marine.
Dimitris holds a speedboat diploma with license to operate Motor Yachts up to 24 meters and a Diploma of Engines Engineer from Sivitanidios Technical School in Athens, Greece.
He has also been twice a Champion of Jet Ski and rib boats races in Greece.
With his pleasant personality, Dimitris is a key factor for guests pleasure and fun on board.
Languages: English, Greek

Stewardess: Rose De La Torre
Rose is 38 years old and has worked for five years as a Stewardess and as a Stewardess/Cook in luxury yachts of 22 to 42 meters. She has also worked as a housekeeper in President Hotel 4* Athens, in a villa in Mykonos and in reputed families villas in Greece. Before coming to Greece she worked for four years in the Accounting Department of Colgate Palmolive in Philippines.
Rose enjoys providing guests with an excellent level of service. She is always smiling, attentive, wiling and at the same time discrete. She holds a Bachelor’s Degree in Accountancy and since 2008 she lives and works in Greece.
Languages: English, Greek, Filipino (native).
Previous Yachts: m/y TIN TIN (42 meters), m/y OBESSSION (32 meters), m/y KALLISTA (30 meters), s/y MARDOR (22 meters)

Deckhand: Roland Mango
Roland lives in Greece since 1990 and during the last 27 years he has worked on various charter and private Motor Yachts of up to 42 meters and on ships.
He is a very capable seaman, with high sense of responsibility and is always there to assist wherever needed.
He speaks English and Greek and joined 4LIFE in 2017.