Global Ocean Race – from Mallorca around the world

A course of 30,000 sea miles all around the globe awaits the teams which start the Global Ocean Race on the 25th of September from Mallorca. 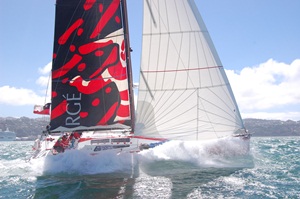 A course of 30,000 sea miles all around the globe awaits the teams which start the Global Ocean Race on the 25th of September from Mallorca.After 5 legs with stops in South African Capetown, in Wellington in New Zealand, in Punta del Este in Uruguay as well as in Charleston / USA the Class 40 yachts will return to the bay of Palma more than eight months later.

For the first time Mallorca will be the port of departure for a top-class open-sea regatta around the world, after Barcelona and Alicante already having hosted sailing crews from all over the world for the Barcelona World Race and the Volvo Ocean Race. At first the Global Ocean Race was staged as "Portimao Global Ocean Race" in 2008 / 2009.

In contrast to the many regattas in Mallorca which often take place excluding the public – unless you have a boat to watch from on the water – the GOR should be a highlight for locals and tourists: On the Muelle de Golondrinas, opposite the Auditorium, a "Race Village" is planned several days before the start, which will be accessible for the public.

The organizers are expecting around 19 crews -amongst them participants from almost all big sailing nations like England, France, New Zealand, the USA or Italy, but also Ireland, Holland, Belgium or the still young sailing nation South Africa will be represented at the start. “Double-handed” sailing will be done – at the moment the English-German women’s team with Hannah Jenner and Anna-Maria Renken are getting the most attention by the media.

The Class 40-boats were developed especially for Offshore races, constructed after a relatively easy "Box Rule" which should limit the costs for participants. Thus extremely costly technology and excessive application of very expensive materials is avoided: Movable canting keels are forbidden, carbon is only permitted as a material only mast and boom – and also the number of sails is strictly limited.

The first Racer is already in Mallorca: The New Zealander Conrad Colman got his brand-new Akilaria RC2, a Class 40 of the third generation, directly after it’s completion in May from the shipyard in Tunisia, and has now transferred it to the Balearic Islands. Since the 19th of June his boat, baptised as "Jasmine Flyer" lies in Marina Port de Mallorca – and Colman is glad about the preparation time he has on the Balearic Islands where he wants to optimise the ship even further: “Palma is the perfect place for preparation, with it’s great bay and great infrastructure”. 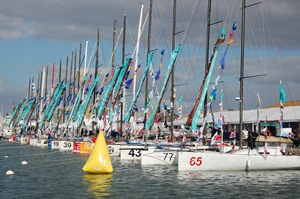 The Global Ocean Race was held for the first time in 2008 / 2009 – from Portugal as “Portimao Global Ocean Race”. At that time the race was made for solo sailors "single-handed" and two teams for Racers of the Open 40 Class. The Belgian Michel Kleinjans was the winner of the solo sailor race and will also be starting in Palma, this year, however, in a team of two. The German team Boris Herrmann / Felix Ohme won the double-handed with the yacht "Beluga Racer" at the Portimao Race – for Boris Herrmann an excellent start to a professional career as an Offshore yachtsman: At the Barcelona Global Race in 2010 / 2011, this time with the bigger Open 60 "Neutrogena" he sailed with American Ryan Breymaier non-stop around the world making an excellent fifth place, now he plans the participation in the Vendée Globe – this time “single-handed” non-stop around the world. Maybe a good omen for the sailors who turn around the capes in Mallorca, who will sail across several seas, through the Doldrums and the stormy sea of the Southern Ocean and hopefully return to the bay of Palma next year in June…