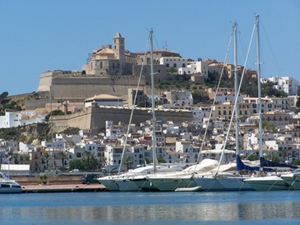 The 3rd largest Balearic island Ibiza, preferred destination of many cruises, is referred to its Catalan name Eivissa more and more often – it used to be called Pityusa by the Greeks, meaning the island of pine trees. Together with Formentera and Espalmador it forms the Pitius Archipelago. The “white island” with its white houses is reminiscent of Southern Spain or Africa, the other colours are added by the blue sea, green pine trees and grey rocks. The elevated coast drops abruptly in the Northeast and West; offshore are lots of shallows and small islands – crews should be careful. Ibiza is renowned as party-island, the tourism has only spared a few bays and at the sight of the land, people, interior, fashion and boutiques the olden hippy times come to life again. Especially in Ibiza town, home to several fleets, as well as in the other two harbours of San Antonio and Santa Eulalia. Usually sailors cover the 80 nautical miles from Majorca to Ibiza town directly. Some people take a stop first at the Isla Tomago, where the shack serves great fish or in the anchor bay San Vincente off a miles long beach on their way towards the harbour of Ibiza. The next port of call from here is Santa Eulalia.

Next stop for the crews is Port d’ Eivissa – the first glimpse onto town, when entering harbour is breathtaking.

One cala follows the next one in the South of Ibiza – beautiful anchorages during the cruise are the Cala San Galeta and Port Roig. The Cala Bandella is deemed to be the scenically most beautiful of the island, with a white beach, turquoise coloured water and lots of greenery at the shallow shores. The Cala Bossa, only 3 miles West of San Antonio, is beautifully lined with pine trees and lends itself for a refreshing stop for swimming. Puerto de San Antonio on the West coast of Ibiza is the closest port away from the Spanish mainland. There are anchorages in the outer harbour as well, in case you don’t want to moor in the marina. The fish market for a scrumptious meal on board is directly at the harbour.

The Northwest coast of Ibiza is very jagged. The Cala Portinatx is picturesquely situated but dangerous during storms. There are enough alternate bays: Cala Charraca, Cala Blanco, Cala Binirras or the nature harbor of Puerto de San Miguel. It’s beautiful all around; sailors are spoilt for choice. 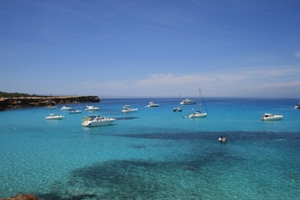 For a lot of people, Ibiza-town is starting point for the trip to Formentera, the Mediterranean South Sea with fantastic beaches in Caribbean colours. The island is only 5 miles south of Ibiza; Espalmador with a popular anchor bay and additional islands with narrow passages is situated in the channel in between. Formentera is dry and sandy – the most beautiful bay, Cala Sahona lies to the West and qualifies as anchorage for day-trippers. Cala Mitjorn to the South boasts the longest beach with hotels, apartments and bars. The harbour of Puerto de la Sabina at the North of Formentera, touches onto two lagoons, the Estany de Paix (fish lagoon) with access to the sea and the closed off bigger lagoon Estany Pudent. The Cala Sabina is scenically beautiful; the Puerto is a jewel of a village with white houses, fishing boats and palm trees. On an island tour with a rental bike, crews can explore quaint villages and divers landscapes.