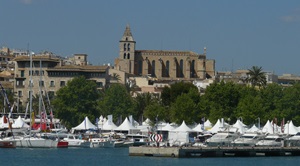 Almost 60.000 tourists come yearly to Majorca. The island’s versatility sets the ideal scene for a perfect trip: Sailing along rough steep coast or through wide bahias with white beaches, past green pine scenery and old Spanish watchtowers, anchoring in romantic “calas”, swimming and snorkelling days in crystal clear waters, action in the clubs of the tourist resorts or shopping in Palma, well equipped marinas or town harbours with the appeal of dreamy fishing villages… here every sailor will find his personal favourite haunt, but above all the boat of his dreams. Passionate sailors or people used to wallow in luxury when cruising really are spoilt for choice on Majorca. offers include sailing yachts bareboat or including skipper, motor yachts ranging from small ribs, sports cruisers and flybridge yachts, bareboat or skippered, to luxury yachts with complete crew, day charters for incentive or private events, cruise vessels or classic two masters for larger groups.

About 40 sport harbours on Majorca itself, perfectly equipped for tourism, attractive trip destinations such as Ibiza, Formentera and Menorca and 303 days of sunshine on average per year set the perfect stage for holidays. Events like the rapidly growing Boat Show beginning of May, presentations of new luxury yachts or premiers of prototypes – and last but not least the evermore attractive racing scene supply fun and information. The absolute highlights from a sporting point of view are the Trofeo Pricesa Sofia, Palmavela and MedCup and a real treat for the eyes are the Superyacht-Cup in June and the classic race Trofeo Almirante de Barcelona in August.

A sporting feat was the fastest circumnavigation of Majorca to date, which was accomplished within 17 hours on the race yacht “Uca”. Those crews going on a relaxed holiday trip should allow themselves a full week – or even longer – there just is too much to discover on about 300 miles of coastal line, when rounding Majorca.

sailors usually take over their sailboats or motor yachts directly at one of the numerous {#keyowrd#} bases in Palma de Mallorca, in Can Pastilla, a suburb of Palma close to the airport, in Cala d’Or or Porto Colom on the east coast or in Puerto de Alcudia or Puerto Pollenca in the Northeast. Most of the suppliers for motor yachts are also located in Palma, in the Southeast in Puerto Portals or in Port Antratx and also in Cala d’Or. 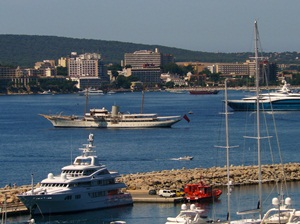 The bay of Palma, highly sought after racing waters, hosts a range of additional harbours: for example Southeast bound Calanova, location of a Spanish support centre for competitive sailors.

Thanks to many little off shore islands and bays, it’s easy to find beautiful anchorage grounds; one of the more popular among crews is the 3-finger-bay of Portals Vells. When anchoring off Illetas, you can have the catering done on board by the Beach Club – in Palmanova on the other hand boasts a big beach. Southeast bound of Palma, you’ll find some smaller fishing harbours, namely Puerto de Portixol, Puerto de Molinar and Puerto de Cala Gamba; a little further down in Can Pastilla in the sports harbour San Antonio de la Playa there is a larger marina again with all essential service amenities for tourists. There sailors have direct access to the Playa de Palma, as with the marina further South in el Arenal, which is pretty and well tended with lots of palm trees. The coastline following Arenal between Cabo Enderrocat and Cabo Blanco is very steep and houses a nature resort above the coast are several urbanisations. The southern coast beyond Cabo Balnco flattens out a little more. The small bay of Cala Pi is romantic but tends to be very crowded in summer. In the harbours of S’Estanyol and Sa Rápita, you’ll find all service amenities on the southern coast. 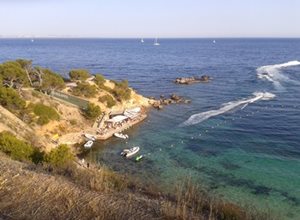 Often these are the last stops before sailors start crossing over to the Cabrera Archipelago. This delightfully picturesque archipelago is under nature conservation, the main island used to be a military prison camp in former times. Today, you’ll find pristine nature again and people snorkelling will rejoice in the abundance of fish. Remnants of an old compound, a museum and a fortress situated on the mountain can be visited; you’ll get a drink in the little cantina. But the best thing about Cabrera is the starry night on one of the mooring buoys down in the dream like bay. The overnight stay is free of charge and the mandatory permission of the conservation authority can be arranged through the companies.

In the western part of the bay of Palma, the bays of Illetas, the great bay of Palmanova, the small bay of Portals next to the harbor of Puerto Portals and Portals Vells of course with the famous “Three Finger Cove” are popular anchorages. Those who are looking for an overnight stay in elegant surroundings can stay directly in Puerto Portals and there enjoy the international flair of a harbor.

Southern and Eastern coast of Majorca

The beach of Es Trenc, renowned for its dune landscape, is situated on the southern coast of Majorca, between Sa Rápita and Colonia San Jordi. The harbour Puerto de Campos, part of Colonia San Jordi, is little suited for yachts. Here the backcountry is flat with Salinas – Cabo de Salinas marks the southern tip. There are countless romantic Calas on the southeastern and eastern coast and always lots of secure harbours in between for safe nights during the cruise. The backcountry tends to get more mountainous the further North you come. On the eastern coast, the Sierra Levant reaches up to 1.600 feet, the lowland in the interior of the island with its typical red soil, its many agricultural fincas and windmills, is deemed to be the pantry of Majorca. By the way, here, wine is cultivated in the plains not on the hills. The most famous bays are the Calas Marmols, Santanyi, Mondragó, Murada, Barcas, Magraner and the Cala de los Pinos.

Porto Colom, a natural harbour bay and a picturesque former fishermen’s village, is the main charter port on the east coast. From here, all the bays and other beautiful little towns can easily be reached. The small fishing harbour of Cala Figuera is enchanting with its many llauts, cafes and galleries, but only marginally suitable for yachts. In Portopetro though there is a Club Nautico and several mooring spaces for guests – good restaurants invite for a shore leave. The harbour of Cala d’Or offers a more sophisticated appeal. Porto Colom is the base of a big fleet. Setting off from the harbour of Porto Cristo, a trip to the caves “Cuevas del Drac” is worthwhile. The harbour of Cala Bona offers hardly any draw, the next safer harbour can be found northbound in Cala Ratjada.

The vibrant little tourist town is very popular among German party people in summer. There are bars, restaurants and clubs close to the harbour aplenty. The swell, bred by departing fishing boats at the mole with only a few mooring spaces for guests, can be a little cumbersome sometimes. From Cala Ratjada the excursion to the little artist’s town of Arta is worth your while. Cala Ratjada is often the last stop on the route to Menorca, which is only 25 nautical miles away.

Wide, open bays, often with beaches stretching for miles and miles, characterise the landscape in the Northeast of Majorca – in the bays of Alcudia and Pollensa with excellent maritime infrastructure for tourism. Smaller bays are perfect for crews looking for an anchor stop in beautiful surroundings.

The little village of Colonia San Pere with a state of the art marina is situated in the Eastern part of the bay of Alcudia. In turn, the small sports harbour Serra-Nova in Son Serra de Marina is not fit for yachts with some draught. sailors have had problems with shallow waters on their way in to the marina of Can Picafort as well. Not really suitable for guests are the harbours of Bon Aire in the Bay of Alcudia and Barcarés in the Bay of Pollenca. The way into “El Cocodrillo”, also called Bon Aire, can be problematic; Barcarés is chock-a-block with little boats.

West and Southwest coast of Majorca

The Northwest is characterised by the Sierra de Tramuntana with the highest peak of Majorca, the Puig Mayor (4.700 feet). The Tramuntana, a mountain chain with a steep coast, ranges all the way from Cap Formentor into the Southwest of the island. The vista from sea is exceptionally scenic, the access neither easy from sea or from land. Some of the picturesque bays and anchorages are only fit for a short stop over during your cruise. Scenically extra beautiful is the Cala de Sa Calobra, a popular excursion destination for Majorcan and tourists alike – the tiny pepple beach with the mouth of the Torrent de Pareis hides behind huge rocks. The hike through the gorge of the Torrent with its sky-high rock faces is an experience. Better suited for an overnight stay for crews is the Cala Tuent.

The only secure harbour on the West coast is Puerto Soller. The harbour has been extended here with swimming jetties; the bay of Soller offers anchorages and a beach that is busy in summer. The whole village – meanwhile renovated and restored – is very favoured among visitors and tourists, and thanks to its location and attractive panorama and owing to the “Tren de Soller”, the old train connection to Palma, world-famous.

The coastline between Puerto de Soller and the dragon island “Isla Dragonera” is also dubbed Costa Brava Mallorquina. The most famous photo scene of this passage is Sa Foradada, a huge natural rock wall with a vast opening within – where it protrudes the sea, the turquoise water tempts for an anchoring stop. Other than that the scenery of the mountains near Deja, Valldemossa, Banyalbufar or Estellencs may be intensely impressive, but most sailors will carry on to Cala Basset, opposite the north-eastern tip of Dragonera.

Dragonera is an uninhabited nature reserve and nesting place to a great many birds. Excursion boats take ramblers across from Sant Elm, respectively San Telmo. Mooring is safe for crews on the buoys in the bay of Sant Elm; the fish restaurants in the little village are famous. The attractive main village of the south-western coast is Port Antratx with a spacious protected bay, a big sailing club and some small bases.

Popular stops in the Southwest during the cruise to Palma then are the ports of Port Andratx and Santa Ponsa, the bays of Cala Llamp and Santa Ponsa are also popular anchorages. Relatively new highlight in the Southwest: Port Adriano with many restaurants and shops on the new pier designed by Philippe Stark and numerous superyachts.