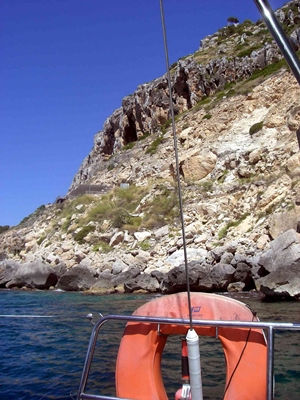 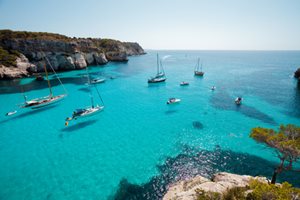 Menorca, the small sister island of Majorca and destination of many cruises, covers about 434 square miles and is considered to be more dream like, pristine and of slightly rougher climate (the cool North winds prevail in the North) than Majorca. The North of the island is traversed by rolling hills, highest peak of this Tramuntana is Monte Toro with about 1.200 feet. Open valleys, white houses, low vegetation and rugged rocks on the coast mark the scenery. The plains in the South of the island are climatically milder and have always been more densely populated. The protected nature harbours of Mahón and Ciutadella have attracted conquerors and pirates of all sorts of different races in ancient times as they nowadays attract tourists. The island belonged to Great Britain for a long time; some linguistic particularities of the native dialect are still reminiscent of it.

There are only four harbours on Menorca, with bases in Mahón. Many crews take their boats over from Majorca and set off to Menorca from there, usually to Ciutadella first – or they do a one way trip and have the yacht returned by a professional skipper of the company. 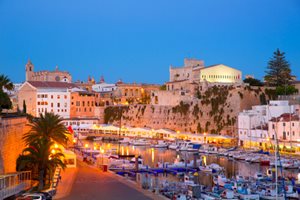 Ciutadella is absolutely charming und worth an extensive walk during shore leave. The townscape is Spanish with Arabic and Gothic influences – with narrow lanes, colonnades and pointed arches, a lovely cathedral and lively city life at the harbour and on the Plaza Borne. At the harbour, protruding long and narrow into town, there is of course a promenade lined with restaurants – if lucky when mooring, skippers could park the yacht directly in front of your dining table. The harbour, which is also a ferry and fishing port, is often busy, particularly during the summer months – if it’s too crowded, crews can avoid it by going on to the Cala Degollador or Cala Blanes.

Sailing the coast and discovering the bays of Minorca

The North and Northeast coast is characterised by red precipices and rolling hills, to the East of Cabo Nati one quiet and gorgeous dream bay with crystal clear water follows the other – with a play of colours of white and yellow sandy beach and red, black and grey rocks. The South of Spain comes to mind in many a village with its white houses. The bays of Fornells and Addeya jut far into the land like fjords inviting crews for a stop at anchor. Puerto de Fornells is not only a pretty fishing port but also has room for crews; there is also an anchorage in the bay behind the Isla Sargantana. Fornells isn’t only appealing for painters, for whom the harbour is a popular scene, but also for gourmets: the fresh lobster and the “Caldereta de Langosta” are legendary. Safe, well priced and situated beautifully is the Puerto de Addeya only a few miles off.

tourists can also find heavenly anchorages near Isla Colom and the fishing village Es Grao with dune landscapes and reed belts in the Laguna Albufera, which is a nature reserve and home to many birds. Beyond the Cala Mesquida with its little sand beach, the coast rises all the way up to the fjord of Mahón to about 260 feet, before it descends steeply again on the most easterly cape of Spain, the Punta del Espero.