Race of the giants – 14.Superyacht Cup in Palma

New location, new main sponsor, new rating system – at the end of July, the super yachts sailed in the Bay of Palma to win the Horus Superyacht Cup. Benefitting from ideal conditions, the spectators on the water were treated to spectacular images, the crews enjoyed sailing at its best – and the mood at the new Race Village at the old jetty certainly matched the class of the event.

If one had strung all 18 yachts altogether, one would have had to walk past an overall length of 654 meters, which is equivalent to an average of about 33 meters per yacht. As it is standard, however, and because it makes sense they all presented themselves with their stern facing the pier at the old jetty, looking stunning and fabulous as models on a catwalk: the super yachts were back again! Crews and owners of these beauties enjoyed the relaxed atmosphere during the evening Happy Hour in the new Race Village. The new location also got a lot of praise from all sides: the spacious bar and lounge area was covered with a great round tent roof, a little Formula-1 simulator was there to entertain, the boats provided the perfect backdrop, the view to the cathedral local colour, and the Old Town was in walking distance for the participants to enjoy an evening stroll.

In contrast, the event itself was not local but highly intercontinental: the first race, the “Abu Dhabi Race” got its name from its Middle East sponsor Abu Dhabi; the yacht with the longest journey of over 13,000 kilometres, the Mari Cha 3, came directly from Tahiti. Bearing witness to the intention to intensify the cooperation with the Caribbean Island Antigua, scene of the winter variant of the Superyacht Cup, was among others a Caribbean barbecue after the first competitive day. Although most of the yachts were built in Europe, almost half in Holland alone and two each in Finland, Italy and England, three of the super yachts, however, were launched far away: one in Australia, one in New Zealand and the William Fife recreation ‘Sunshine’ even in Myanmar. 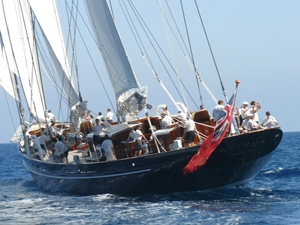 Three races were on the agenda between 25th and 27th June – the first two at light wind, on the third day, however, the windspeed achieved up to 18 knots. For the first time, rating took place in accordance with the bucket system, which has already been tried in the Caribbean – the yacht, which according to detailed calculations is expected to be the slowest, starts first, the fastest last. Based on windspeed, length of the sailed course and previous day results, the start sequence can change every day. Further calculations are not carried out – who arrives first is the winner of the regatta. With this system (in Germany known as Deutschland “kangaroo start“) collisions, which can and do occur at other regattas by highly contested mass starts, are avoided right from the start so that the noble racers are not damaged – ideally all reach the finishing line together, which is exiting both for skippers and onlookers.

Perfect start-finish wins were achieved by the yachts that started first in the first and third race: during the first race, the 46 meter long Antara, built in 1991 by the Italian shipyard Perini Navi, was unchallenged and continuously at the front; the 31 meter long Sunshine, on which due to her classic sails everybody’s eyes were drawn to in any case, copied this bravura performance on the third day of the race. The Sunshine was only built in 2004; she is, however, a hull-and-rigging replica, based on the design of the legendary William Fife anno 1900. On the second day it was the turn of the light wind specialists to have their noses at the front: the almost 27 meter long Wally Open Season prevailed over the Black Pearl – at 25 meters, the boat of Baltic Yachts was the smallest, and built in 2008, also the youngest yacht in the field. Less successful than usual were the Hyperion (Royal Huisman construction) and Anny (Baltic Yachts in accordance with a Judel Vrolijk design), which both had experiences in the previous three Superyacht Cups; the Hyperion even won it twice: in the end they achieved place 13 (Hyperion) and 15 (Anny); between them was the longest yacht of the race, the 51 meter long Meteor, a truly beautiful boat, built in 2007.

The overall winner was the 32 meter long Gliss (Royal Huisman) which won a third, a fourth and a ninth place ahead of the Perini Antara and the Wally Open Season: each of them had achieved a first and a second place, but were too far behind in one race each to be able to make up for it.

The wish of the organisers, to see – in accordance with the bucket system – all yachts coming in fairly close together, was granted at the third race day, at the so-called Horus Race: 15 yachts sailed over the finishing line within only 20 minutes; eight of them even within three and a half minutes!

Due to the fact that title sponsor Monaco-based premium watch maker Horus made a 3-year commitment, the date for the 15th Superyacht Cup in Palma has already been fixed: from 23rd to 26th June 2010, the giants will once again sail in the bay below the cathedral – prior to that, however, they will meet again in the Caribbean in January 2010: at Nelson’s Dockyard in English Harbour on Antigua.

Sunshine, built after a William Fife design from 1900, won the Horus Race on the 3rd race day and achieved 12th place overall.