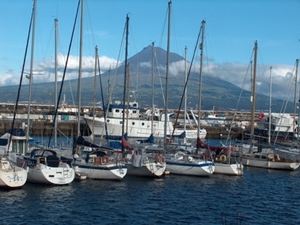 In the Atlantic Ocean, some 760 nautical miles west of Europe, and more than 2100 nautical miles east of North America, is the archipelago of the Azores – an autonomous region of Portugal, western outpost of the European Union. Most sailors know the "hawk islands" (Ilhas dos Acores) mainly from the weather forecast, when once again a stable Azores high provides nice weather in Central Europe. Many sailors make a stopover at the Azores an Atlantic crossing, preferably in Horta on Faial Island. For yacht charter in the Azores, there is a small fleet of charter yachts available.

The nine main islands of the Azores are divided into three groups: the "Grupo Ocidental" in the northwest with Flores and Corvo, the "Grupo Oriental" in the Southeast and the "Grupo Central". In the southeast, there are the biggest and main island Sao Miguel with the capital Ponta Delgada, the island Santa Maria, and the uninhabited archipelago of Formigas. The central group, which is particularly interesting for sailors, consists of the island of Faial, with the well known capital of Horta, Pico, Sao Jorge, Graciosa and Terceira. Between Corvo in the northwest and Santa Maria in the southeast of the archipelago, the distance is about 340 nautical miles. Approximately 20 per cent of about 250.000 inhabitants live in the capital, Ponta Delgada.

The Azores have been colonized by the Portuguese in the middle of the 15th Century. While previously farming with the cultivation of sugar cane, oranges and pineapples, tobacco and tea was the main source of income, later the inhabitants reinforced trade and whaling – now they live on livestock, tourism and especially eco-tourism gets more and more important. Tourists can also watch more than thirty species of whales and dolphins.

Due to the Gulf Stream, there is a relatively mild climate year-round in the Azores: with an average of 13 degrees Celsius in winter and 23 degrees in the summer, and water temperatures ranging from 18 to 24 degrees. Lush vegetation alternates with more bare volcanic formations – earthquakes and volcanic eruptions in the Azores are not uncommon even in recent history.

Yacht Charter Azores crews reach the Azores via the international airport of Ponte Delgada Joao Paulo II (PDL) and the regional airports on the other 8 islands, all of which are also connected by with ferries.

For bareboat charter in the Azores, there are based some yachts only since 2011. Sailors can charter yachts on three islands of the "Grupo Central" at the charter bases in the marina of Horta on Faial Island, in Velas on Sao Jorge and in Marina in Lajes do Pico.