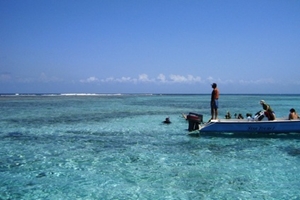 The southernmost larger island of Saint Vincent and the Grenadines is Union Island, not too large but meanwhile with a good infrastructure for Yacht Charter crews and other tourists. In the rather large bay of Clifton Harbour with two marinas – Anchorage Yacht Club and Bougainvillea Marina – and mooring buoys even charter boats are based nowadays, a new project is being implemented on the south coast in Ashton Bay, well suited as a day-anchorage is Chatham Bay on the west coast. All essential services for Yacht Charter are offered in Clifton Harbour. The small town is dusty, Caribbean-colourful and very lively – and known to be a shopping destination for duty-free purchases. A beautiful vantage point with a panoramic view over the whole area is Fort Hill.

Palm Island south easterly of Union Island is almost entirely surrounded by reefs; the only passage to a dreamlike anchorage is on the west coast. Gazing through the reefs, Palm Island is the perfect vision of the island of one’s dreams: turquoise coloured waters and palm-lined beach. Formerly known as “Prune Island”, the island owes its name to an American, who leased the island and planted coconut trees. The Beach Club with jetty, hotel, bar and diving base that has been founded by him still thrives.

PSV, the equally enchanting little neighbouring island of Petit Saint Vincent, is a pure hotel island with outstanding catering, which of course is open to “Yachters” lying at anchor. It’s best to lie directly opposite the hotel, which is of course equipped with a dinghy dock.