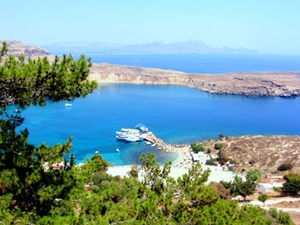 Rhodes, the main island of the Yacht Charter area Dodecanese Islands, counts more than 3,000 hours of sunshine per year, making it one of the sunniest regions in Europe. The island, home to several Yacht Charter basesm is located in the southwest of the archipelago on the line between the Aegean and Levantine Sea, to the Turkish mainland coast distance is only about 10 nautical miles. During Yacht Charter trips to the other northwest Dodecanese islands you often have to sail against the prevailing wind direction, but on the way back to the Yacht Charter base you often cank enjoy delightful downwind courses. Many Yacht Charter crews sail from Rhodes to the Turkish mainland. On the west coast of Rhodes are the so-called Shepherd Islands – Calki and Alimia are only a few miles away. And the popular island of Symi is really in the neighbourhood..

In the city of Rhodes in the north of the island, the ferry and cruise port and the Yacht Charter harbour Marina Mandraki are next to each other. Yacht Charter crews, who check in at Rhodes, reach the marina from the airport by taxi in about 20 minutes. The Port is loud and lively, but Yacht Charter crews reach the center of Rhodes easily walking. The harbor entrance is easy to see: on two pillars are the heraldic animals of Rhodes, stag and doe. On the pier, ideal for a stroll, is the fortress of Agios Nikolaos built in the 15th Century, and some old windmills, probably the same age. Opposite the Yacht Charter marina are the agora (marketplace) with numerous cafes and taverns, and in the center, there are many shops and restaurants. Sightseeing spots: The Grand Master’s Palace and the Murad Reis Mosque.

The Yacht Charter destination Rhodes is living from tourism – but as well wine and olive cultivation and cattle farming are carried out intensively. The west coast is completely made for tourism, with hotels, nightclubs and bars, but the tourist center due to the milder climate, is the zone around Faliraki at the east coast. Destinations for excursions for Yacht Charter crews: the valley of the butterflies in the northwest, the baths of Kallithea, the ruins of the old city Kameiros in the West or the ruin of Monolithos on the south coast.