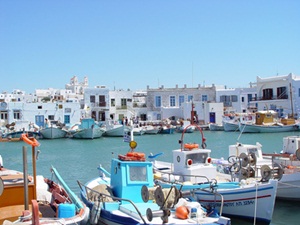 The island of Paros, where there is a small Yacht Charter base, is located in the middle of the Yacht Charter region Cyclades and is the third largest island of the archipelago. Directly in the east is the larger island of Naxos, in the southwest, the smaller sister island Antiparos. The main town of Parikia / Paroikia and the Yacht Charter base are located in the north west of Paros. The island has many hills, three large bays cut deep into the country: the bay of Parikia, the bay of Naoussa, about 10 kilometers from the main town, where there is also a port, and in the east the bay of Marmara. The name is reminiscent of marble: Paroikia was once a major center for trade in the precious stone. Yacht Charter crews reach Paros by ferry – either by fast ferry from Athens, or from one of the neighboring islands, like Naxos or Mykonos. From Athens there are also flights to the small airport of Paros.

In Paroikia, Yacht Charter crews can visit the most beautiful church in the Cyclades: The "Church of 100 Doors" with the name Katapoliani actually consists of three churches and was created by one of the builders of Hagia Sophia. Yacht Charter crews can also make a trip to one of the many monasteries of Paros – or to the oldest settlement in the Cyclades, lying on Saliagos, a small island between Paros and Antiparos. Naoussa, port and fishing village, with its narrow streets, the restored center of the village with white houses in the typical Cycladic style, is said to be one of the most beautiful places in the archipelago. In the bay of Naoussa Yacht Charter crews can anchor or get a berth in the marina which is quite new – attention: when the Meltemi is blowing, the small fishing port is not well protected.