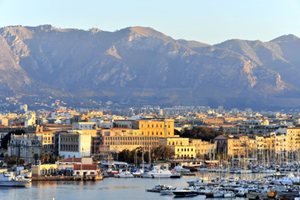 The yacht charter destination Palermo, Italy’s fifth largest city, is situated in a bay on the north western coast of Sicily. The city is surrounded by the mountain Monte Pellegrino in the north and Monte Catafalno the east. Palermo Yacht Charter crews fly mostly to Palermo airport, but some charter bases but also offer airport transfers from Catania airport to the charter yacht in Palermo.

Palermo, founded in the 8th Founded century BC, developed quickly into the cultural and economic center of Sicily while being ruled by various occupiers. The town got its name from the Greeks, who called her “great port”. After the end of the Arab occupation, Frederick II, made her “city of residence.”

Today, the port of Palermo is the largest of Sicily, and it is the seat of important industries and now a major tourist attraction as well. Palermo Yacht Charter crews can explore countless attractions in the city, like parks, churches, palaces, such as the Norman Palace and other buildings. Especially noteworthy are the Teatro Massimo of the 19th Century. Also interesting for Yacht Charter Sicily crews: the major markets such as the Mercato della Vucciria or the Mercato del Capo.

Most charter trips from Palermo lead either to the Lipari Islands (Aeolian Islands) with Stromboli, Vulcano, Ustica and other picturesque islands -. Or westward to the Egadi Islands

For yacht charter Palermo crews there is a charter fleet of sailing yachts and catamarans in Palermo of nearly all major shipyards available, and as well motor yachts. Charter the best yacht for your sailing vacation in Sicily from Palermo online or just ask for offers for yachts that are not listed in our Yachtfinder. And of course we will be glad to offer Luxury Yachts for Charter in Sicily from Palermo as well.