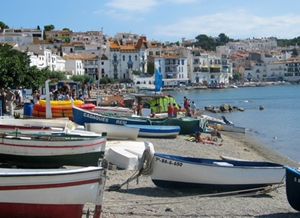 The wild and romantic Costa Brava is a treat for the eyes: rugged rocks with tiny woods with pine trees and acacias and typical Mediterranean and maccia vegetation on top. Steep mountain slopes, quaint bays hidden among capes, which are easier to access via boat than by car on narrow serpentines, pretty fishing villages, sandy beaches, crystal clear waters, a colourful underwater world and culinary delights ashore. The wild coastline starts near the foothills of the Pyrenees near the French border and extends almost all the way to Barcelona.

The capital of Catalonia thus lends itself as starting point for the charter trip, but also Palamós for example, directly on the Costa Brava. Next to rambling from bay to bay and the exploration of fishing villages like Tamariu and Estartit, the sailor is faced with two tasks on shore leave: follow the footsteps of Dali – with museums in Figueres and the famous Cadaques – and delight in the culinary highlights: Ferran Adriá, inventor of the famous molecular cuisine, runs his restaurant El Bulli in the vicinity of Roses. 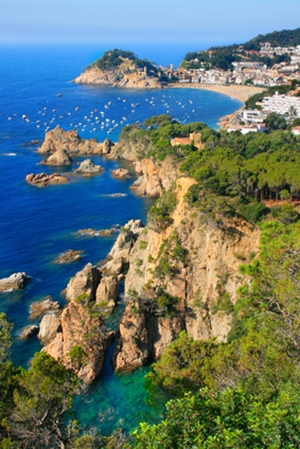 Apart from the bays, a marina awaits the sailor almost everywhere – from Palamós (with even two yacht harbours) and northbound the marinas Llafranc, Aiguablava, L’Estartit, L’Escala, Empuriabrava, Santa Margarida, Roses, Port de la Selva, Llancà, Colera and Portbou. Southbound, Port d’Aro, Cala Canyelles, Blanes, Arenys, Port Balís, Premiá de Mar, Eel Masnou and the Marina Badalona, could be scheduled on the trip itinerary towards Barcelona. In between the marinas, sand beaches and calas can be found time and again, especially on the long beaches, like the one at Lloret de Mar typical tourist strong holds have been established.

And of course you can charter in Valencia, which is deemed to be a sailors haunt since the America’s Cup. Or in Denia, not to far from the Balearic Island of Ibiza.

The winds here blow from a north-easterly (Maestral) and north-westerly (Gregal) direction for 70 percent of the time; the sailing waters are more protected south of the Cap de Creus.