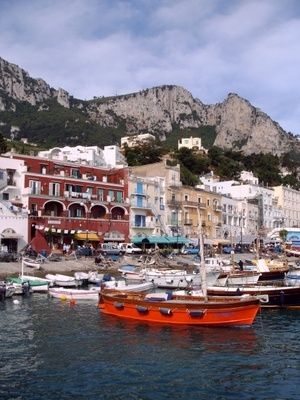 Many regard the coast near Amalfi and Positano, as the most beautiful of Italy, the Gulf of Naples with Ischia and Capri has been a destination for the hopeless romantics for a century. Charter yachts can be taken over in Salerno, Naples, Marina di Nettuno and Procida among others. In Amalfi itself, an important tourism base in South-Italy, the dome entices for a detour, lots of picturesque villages like Atrani or Vietro sul Mare lie directly on the coast – with yellow, white and pink-coloured houses and lots of citrus trees. But admittedly the highlight is Positano, a fishing village in former times it is laid out in form of awe-inspiring terraces. But there is also no want for antiquity: the visit to Pompeii destroyed by Mount Vesuvius and the Herculaneum is top priority on the itinerary of hobby-archaeologists.

You have the best view onto Naples, hometown of pizza that was invented here, from Vomero, a little mountain with the Castel Sant’Elmo. Further highlights: the old own – world heritage site, still boasts the same Neapolitan flair as during the times of the teenage Sophia Loren, who grew up here; with narrow lanes, catacombs and churches, markets with busy vendors, cafes in which the locals enjoy Espresso and Limoncello. It is more elegant around the fishing harbour Santa Lucia in the elegant residential area of Posilipo.

The most beautiful trip in this area from a sailing point of view does indeed lead away from the mainland: Ideal starting point is Procida, a former prison island and nowadays base to several Yacht Charter companies in the Gulf of Naples and site of several fishing villages. Leaving Procida towards West you’ll discover a piece of unspoilt Italy in form of the Pontine Islands. Ventotene in the Eastern part of the archipelago is a loveable fishing village – make sure that the anchor doesn’t get caught in the chains of other yachts and fishing boats in the narrow harbour of Porto Nicola. From here you can discover the old fortress or the staircase of the House of Bourbon on foot. The modern harbour of Cala Rossano offers more service than Porto Nicola. The neighbouring island Santo Stefano was a convict colony until 1964, remains of the prison can still be visited. Fun fact: Mussolini has been exiled to Ponza, the antis of his fascist regime to Ventotene. The main island Ponza und the neighbouring islands Gavi, Zannone and Palmarola lie in the West of the Campanian Archipelago. Whereas Zannone and Palmarola are hardly populated, there is space for 200 yachts on swimming jetties with water and electricity in the harbour of Ponza. Depending on the wind direction there are several bays that also offer shelter during night, ranging from Cala Inferno to Cala di Lucia Rosa. Historical sites, little villages, bays with crystal clear waters – the archipelago is really worth a journey and if Italian “canzoni” are audible in the cockpit on the tack there, the beam wind blows with four to five Beaufort and a whole dolphin family joins the yacht frolicking, this trip will stay unforgettable.

Ischia and Capri, the two islands in the Gulf of Naples that together with Procida form the Campania Archipelago, are well suited for a stopover on the way to or from the Pontine Islands. The main harbour of Ischia tends to be overcrowded, but is so picturesque that you’ll have to moor there at least once. Additional harbours are Sant Angelo in the East of the island, Forio and Casamicciola. The extinct volcano Mount Epomeo over towers the island; you can climb it on the back of donkeys. Vineyards, lush vegetation and above all the thermal gardens once made Ischia famous, worth seeing are among others are the Poseidon Gardens. On Capri there is one in the form of Marina Grande on the northern side from which the village of Capri is accessible on foot. Surely everyone has once heard of the Blue Grotto in Capri, however it is so overrun that the visit is not necessarily worthwhile. Much better: the fantastic panorama with the vista over the whole of the Gulf from Monte Solare.