The Chesapeake Bay is the largest bay in the U.S. – actually a river estuary, where 150 rivers and creeks meet to flow into the Atlantic. The famous Battle of Chesapeake took place here in 1781: The French fleet defeated the British Royal Navy – a milestone on the road to American independence. The water surface of the unique yacht charter area Chesapeake Bay covers 12,000 square kilometers, from the mouth of the Susquehanna River in the north to the mouth in the Atlantic Ocean, the Chesapeake Bay is over 300 km long. The federal states of Maryland and Virginia lie next to the Bay. Near the mouth into the Atlantic Ocean the Chesapeake Bay Tunnel connects both banks. The narrowest point at Annapolis is over six miles wide – here, the Bay Bridge provides the transport link between the banks. On the Delmarva Peninsula, which is protected, there are marshes, which are flooded often at high tide. 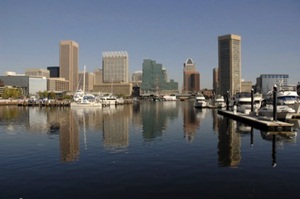 As sailing area and yacht charter destination the Chesapeake Bay is ideal, for the local sailors the season lasts almost all year round. A protected area with great anchorages, many small islands and peninsulas, unique nature, creeks, a wildlife park, interesting towns and picturesque villages await the yacht charter crews. On the eastern shore of the Chesapeake Bay Yacht charter crews find numerous marinas, and picturesque towns and fishing villages. On the western shore – or near – are the larger cities, like Baltimore, Washington DC, Hampton Roads and Annapolis, home of a rather large yacht charter base.