When the Spaniards discovered by chance the Galapagos Islands in 1535, they named the archipelago “Islas Encantadas” – Enchanted Islands. In the 17th Century they served as a pirate lair. In the 19th Century, they were renamed due to the resident giant tortoises and then called “Galápagos”. As Ecuador took possession of the islands, they were renamed 1832 to “Archipelago of Ecuador” and gradually settled peacefully. 1835 evolutionist Charles Darwin visited the island group, which consists of 14 large and 100 small islands. Since 1892 the islands are now officially named “Archipelago de Colon – Columbus Archipelago.

Meanwhile, some 30,000 people live in Galapagos. Only five islands are inhabited: Santa Cruz, San Cristobal, Isabela, Floreana (Santa Maria) and Baltra – on this island, called as well Seymour Sur, is the airport for the tourists. 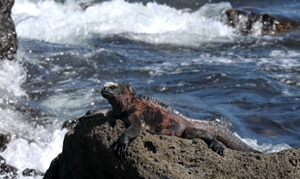 Galapagos is today with its endemic species of animals and plants best known as a unique ecological paradise. Some 80,000 tourists visit each year, including tourists. Bareboat , however, is not allowed. For the purpose of preserving the ecosystem tourism is strictly limited – available for yacht charters , there is a choice of luxury crewed motor yachts and very few sailing yachts. Please contact us for offers!